Hetsu-miya, Munakata Taisha— Center of Faith in the Three Female Deities of Munakata, Passed Down Since Ancient Times

Hetsu-miya, which is located near the Tsurikawa River in Tashima, Munakata City, is one of the three shrines that comprise Munakata Taisha. It enshrines Ichikishimahime-no-Kami, one of the Three Female Deities of Munakata.
Visitors passing through the torii gate and proceeding along the path will find the Main Hall beyond the Shinmon gate.
On this site, shrine buildings had been constructed by the twelfth century, but were repeatedly destroyed in battles and fires. After the most recent destruction caused by a fire in 1557, the present Main Hall was built in 1578 by Munakata Ujisada, who was a daiguji, the highest ranking priest of the shrine. Since he had no children, the family of the Munakata daiguji died out.
The present Worship Hall was built in 1590 by Kobayakawa Takakage, who was then the lord of this region. Subsequently, the Kuroda family began to govern the Fukuoka Domain and successive lords of the family funded the repair and maintenance of the shrine buildings.
In this way, faith in the Three Goddesses has been passed on through many generations to the present day. Both the Main Hall and Worship Hall have been designated as Important Cultural Properties by the Japanese government.

Adjacent to the main hal and worship hall are several small subordinate shrines. These were relocated to the present site from other sites in the Munakata region in 1675 by Kuroda Mitsuyuki, the third lord of the Fukuoka Domain.
Some shrine buildings standing today were actually built that year.

Following the path beside the shrine buildings, visitors will find steps on behind the shrine that lead up Mt. Munakata. The steps lead to Takamiya Saijo (Ceremonial Site), where ancient rituals were performed. Takamiya Saijo is very important since the rituals currently observed at Hetsu-miya originated there. To the northwest of the ceremonial site, visitors can view the marine route linking Hetsu-miya with Okinoshima via the Tsurikawa River, Oshima, and finally across the Genkai Sea.
Visitors who descend the hill from Takamiya Saijo will find two shrine buildings. During medieval times, Hetsu-miya comprised three important shrines: the primary, secondary, and tertiary shrines, respectively called Tei-ichi-gu, Tei-ni-gu, and Tei-san-gu. The present Main Hall and Worship Hall of Hetsu-miya originally comprised the primary shrine. The two shrine buildings standing behind the two halls are the secondary and tertiary shrines, which are respectively dedicated to Tagorihime-no-Kami of Okitsu-miya, and Tagitsuhime-no-Kami of Nakatsu-miya. The present structures of the secondary and tertiary shrines were the subordinate shrines of Ise Jingu Shrine, gifted in 1973, when the subordinate shrines in Ise rebuilt their structures on the 60th Shikinen Sengu (regular construction of new shrine buildings).
Since the Main Hall of Hetsu-miya enshrines Ichikishimahime-no-Kami, visiting all three shrines allows visitors to worship the three female deities of Munakata.

Visitors proceeding along the path will then find the building of the Shimpo-kan Museum.
Its collection comprises all 80,000 votive offering artifacts unearthed from ritual sites on Okinoshima, all of which have been designated as National Treasures. They include a triangular-rimmed deity-and-beast mirror, a gold ring, and gilt-bronze dragon heads.
In addition to unearthed artifacts, the museum exhibits premodern texts that demonstrate the prosperity of the Munakata Daiguji family (whose members served as the highest ranking priests of Munakata Taisha) during the medieval period, and offerings donated to the shrine by the Imperial family and the lords of the Fukuoka Domain, and many other sacred treasures of Munakata Taisha.Uminomichi Munakatakan MuseumThis facility offers an explanatory overview of the entire property. The large screen and 3D movie theater introduces viewers to the experience of being on Okinoshima. 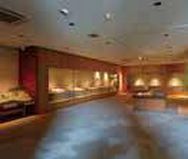 Munakata City Museum for the Study of Local Culture